Probiotics? No. Metabiotics? Yes and more is better

Why we should be learning how to boost the gut production of “metabiotics”, the least known and most recently named …biotic

Making sense of the 4 biotics

Following on from successive hysterical food fads comes the stampede to find and sell the next probiotic. And naturally those with more money than sense are throwing it at probiotics but what does scientific plausibility add to the picture?

So far, very few probiotic bacteria or combination of bacteria other than total fecal transplant has been able to modify the microbiome, and why on earth would anyone expect a few bacterial colonies to impact an ecosystem containing up to 10,000 species of micro-organisms and trillions of individual cells.  On the other hand, different diets invariably produce profoundly contrasting microbial patterns. We already know how important substrate is for microbial growth, they bloom with appropriate substrate and vanish just as quickly and become dormant without it.  A probiotic without an ecological niche and substrate to sustain it is unlikely to survive so synbiotics make a lot more sense but still the probiotc component of any synbiotic mixture has yet to be seen to impact the overall complex microbiota ecosystem.

What we do know is: 1. diet and particularly fibre profoundly changes the microbiota and 2. increased species diversity is better than decreased diversity and 3. diverse diets with mixtures of different fibres increase microbiota diversity much more than a single fibre source.

But by what means do the microbiota improve health, certainly not directly because the integrity of the gut permeability barrier, (tight junctions between gut lining cells and thickness of the mucus layer) separates an incredibly hostile concoction of antigens and microbes from gut lining cells and the blood stream.  The microbiota must be kept out to prevent all manner of immune malfunction and inflammation while compounds produced by them, their metabiotics harvested. 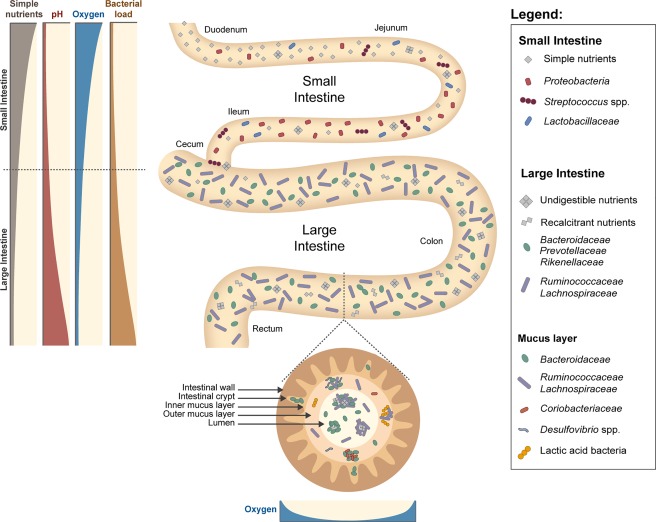 The importance of metabiotics should not be surprising as most plant eating animals rely almost exclusively for their nutrition on biproducts of microbial breakdown of otherwise indigestible plant materials. The most important of these metabiotics that we know of are short chain fatty acids (SCFA) but there must be many more as grazing animals build all their body mass eating virtually no digestible protein, carbohydrate or fat and these animals demonstrate a direct relationship between the amount of fibre consumed and microbiota derived nutrients available for growth and energy. This dose response relationship must hold for humans as well, levels of SCFA increase proportionately with fibre intake, mainly acetate, propionate and butyrate, but little is known of how much SCFA is best for man. Whereas the EFSA has so far denied all health claims for “Prebiotics” they have approved several claims for fiber, however the health benefits of fiber go way beyond the simple concept of bowel regularity. Fibre is a powerful antidote to diabetes and its benefits are being linked to many other diseases  (Kim, 2014).  SCFAs are essential nutrients for intestinal cells particularly butyrate which provides colonic epithelial cells their main energy source as well as cell signaling effects that produce profound changes in the structure and function of the whole hind gut  (Riviere).  Further beneficial effects of SCFA are mediated through 2 types of free fatty acid receptors present in cells widely distributed in the body such as CNS, immune cells, fat cells, and insulin producing pancreatic islet cells  (Priyadarshini, 2016). Colonic entero-endocrine cells increase in number and increase production of incretin hormones GLP1 and PYY on stimulation by SCFA  (Konishi, 1984).  GLP1 and PYY suppress appetite and voluntary food intake  (Spreckley, 2015).  GLP1 has multiple beneficial actions across the body but particularly regulating glucose metabolism, pancreatic beta cell function and appetite suppression  (Zietek, 2016). GLP1 agonist drugs are widely used for the treatment of diabetes and obesity but endogenously produced GLP1 is largely responsible for the remarkable cure rate of type2 diabetes with gastric bypass surgery  (Madsbad, 2014). Both GLP and SCFA are involved with preserving intestinal permeability barrier function  (Cani, 2009) and butyrate and propionate are powerfully anti-inflammatory and may reduce autoimmune diseases, allergies and promote oral tolerance of potential food allergens  (Richards, 2016).  The so called ‘Leaky Gut Concept’ may be a triggering event in inflammatory conditions and autoimmune diseases such as colitis, arthritis, asthma, celiac disease and type 1 diabetes  (Marino, 2017) as well as a factor in age-related diseases that are thought to be increased by systemic inflammation such as heart attacks, strokes, cancer, and dementia  (Bourassa, 2016). Recent research links Parkinson’s Disease with “leaky gut” inflammation and recommends fibre pre-biotic nutritional therapies to boost SCFA production  (Perez-Pardo, 2017). Systemic inflammation is a prominent factor in type 2 diabetes and the anti-inflammatory effects of butyrate and propionate may be involved in the observed protection from diabetes with high fibre diets (Meijer).

What is the ideal level of fibre consumption and can you have too much of it? 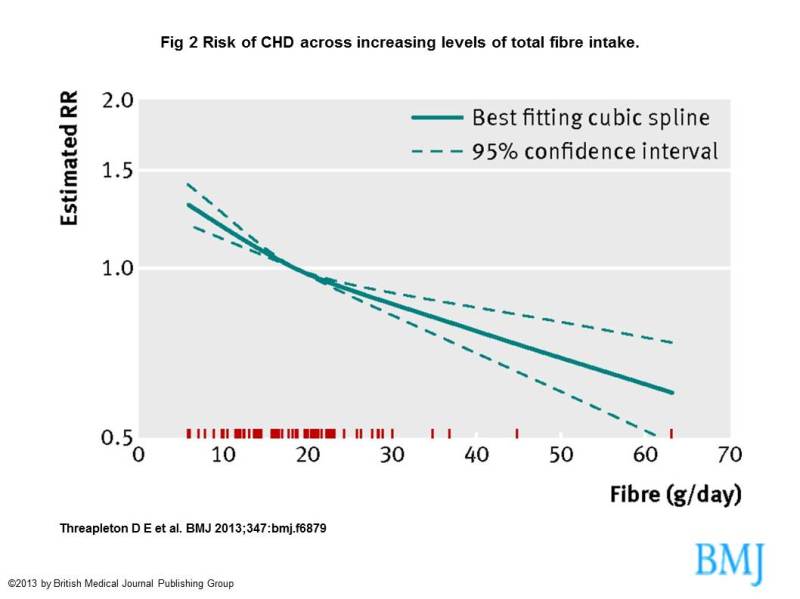 Risk reduction from heart disease with increasing consumption of fiber

This figure from Threapleton’s meta-analysis shows increasing protection against heart attack (CHD) with increasing consumption of fibre. The study suggests larger amounts (60-70 g/day) than current nutritional guidelines (25-35 g/day) would be at least as protective as the 30-40% relative risk reduction claimed in statin trials.  The average carbohydrate consumption in the US is around 500 g/day but that could be replaced with 60-80 plus g/day of fibre and because of the self limiting satiating effect of fiber it’s difficult to eat too much. The effects are transformational, reducing energy intake, eliminating glucose and insulin variability while increasing substrate to promote microbial diversity and SCFA production  (Threapleton, 2013).  For the paleo afficionados, one thing we know is that pre-historic man relied on much more dietary fibre for sustenance possibly 100-200 g/day and from the available studies so far- more is better.